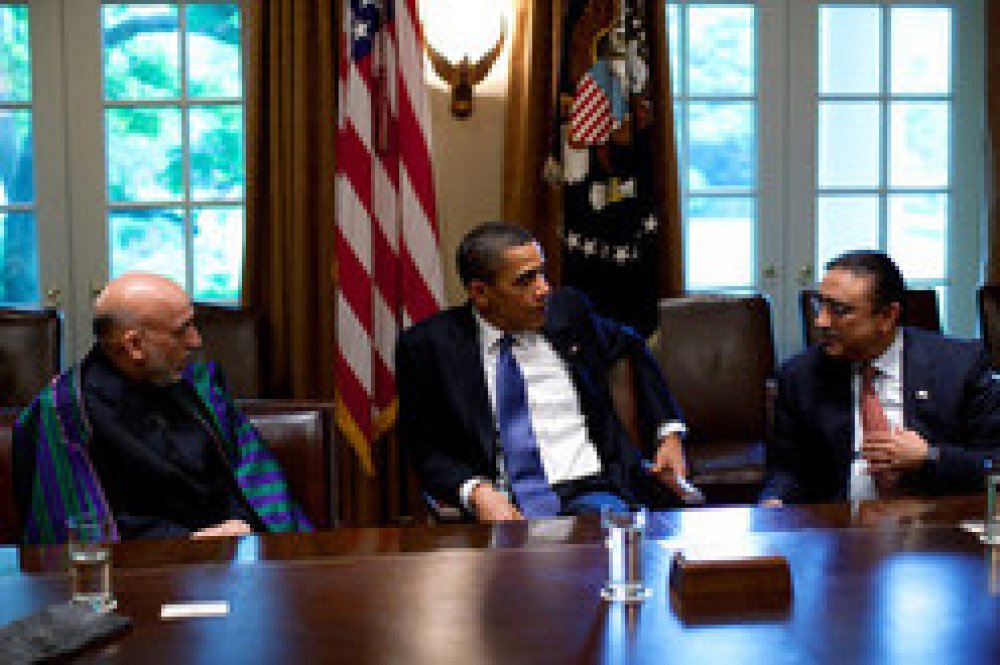 Published in 'War on terror'
Tagged under

U.S. President Barack Obama's plan to negotiate with the Taliban in Afghanistan has generally been welcomed in Pakistan. It is being seen as a vindication of the Pakistani government's long-held position that a solution to the Afghan problem should be sought through a combination of political and military means. The turmoil in Afghanistan has weighed heavily on Pakistan - more than on any other external actor related to the Afghan conflict. Thus Pakistan is genuinely keen to achieve a peaceful and stable neighbour. Its concern is to ensure that any plan for dialogue is carried to its logical conclusion, and that it does not collapse prematurely.

Pakistan's positive reaction to Obama's dialogue plan is strongly motivated by its understanding that it is part of a larger American exit strategy. The exit strategy, which emerged from Obama's review of the Afghan war, has changed American attitudes towards regional actors. The new policy recognises Pakistan's critical role, and seems to address its key concerns on the conflict. Pakistan's foreign policy and military doctrine continue to be India-centric; hence a key motivation for Pakistan to support the revamped Obama plan is the diminished role of India in the new American policy. Pakistan looks on this as a major strategic gain. It also views favourably the prospect of providing training facilities to future Afghan military and police forces. The symbolism associated with the issue is also important; Pakistan feels a change in the American tone in its dealings with her to one where she is treated with more dignity. Pakistani public opinion feels a change from the contemptuous behaviour of the Bush era in which U.S. officials repeatedly charged Pakistan with "duplicity" and admonished it to "mend its ways" and "do more". Pakistan is now being courted to assist in America's exit strategy. On the domestic front, Pakistan hopes dialogue with the Afghan Taliban will help address its local "Taliban problem".

Can these pious hopes be brought to fruition? The answer will depend on consistency in policy on both the American and Pakistani sides, and their ability to develop an operational infrastructure to implement the new policy.

The fundamental question is: can Pakistan be America's key partner to ensure its own exit from Afghanistan's treacherous mountains. After all, Pakistan has a track record of success. Twenty years ago, Pakistan was America's key ally to ensure a Soviet exit from the same land. Can the two draw upon the successes and failures of that earlier episode?

A stick and carrot strategy

When U.S. President Nixon decided to exit Vietnam, he called his policy: "Peace with Honor". Former Secretary of State Henry Kissinger took pains in his writings on that period to explain how his bombing missions during the closing days of the war were combined with secret negotiations with the North Vietnamese in Paris. Using the "stick and carrot" is an established methodology for fighting wars, especially in their closing days. The American war in Afghanistan seems to have entered that phase.

Americans have reluctantly recognised the Taliban as a credible force both militarily and politically, and are seriously considering the prospect of a post-American Afghanistan for which they should enter into negotiations, possibly within a multi-track framework. Reports suggest this process started a few years ago and was formally announced to a gathering of key stakeholders in London at the end of January 2010. Despite U.S. Secretary of State Hillary Clinton's reluctance to call it by that name, the summit appeared to the rest of the world as the formal recognition of an exit strategy. Obama's December 2009 announcement of a troop surge was Part One of the exit strategy (the stick), and the London conference is Part Two (the carrot).

According to official sources, the aim of the London conference, co-hosted by the UK, UN and Afghanistan, was to agree on a clear international plan for the next 18 months, and to move towards an ultimate transition of power to established local authorities. The concluding communiqué declared the conference a "decisive step towards greater Afghan leadership to secure, stabilize and develop Afghanistan".

When examining the reactions of Pakistani policy makers and key commentators, we note that Part One of the strategy was received cautiously and with a negative tilt. Pakistanis did not favour a strategy that relied on military action alone, and instead counselled that this strategy should be combined with negotiations. Since Obama announced his troop surge, a series of regional meetings were held. These included a trilateral meeting in Islamabad (Afghan, Iranian, and Pakistani foreign ministers), Istanbul (Afghanistan, Turkey, and Pakistan), and another meeting in Istanbul attended by all Afghanistan's neighbours. (India was excluded from this meeting because of Pakistan's reservations.)

In contrast to its response to Part One, Pakistan's reaction to Part Two seems to be positive, even enthusiastic. Most Pakistani commentators view the position taken in London as a vindication of what Pakistan has been advising for some time. But the enthusiasm hinges mostly on the conference's recognition that, as far as Afghanistan is concerned, Pakistan is a far more central role-player than India. With these developments, Pakistan has emerged as a pivotal player, openly asserting its reservations regarding Indian involvement in post-war Afghanistan.

Pakistan's foreign minister, Mahmood Qureshi, believes that since India has no border with Afghanistan, it does not fit into the scheme, except in a developmental role. Pakistan regards the London conference as a recognition of its position that Indian involvement in Afghanistan was a source of trouble for rather than support of American aims, because India fuelled unrest in parts of Pakistan bordering Afghanistan.

Pakistan's official reaction to the new American move is embedded in statements of her army chief, General Ashfaq Kayani, made during and after his visit to NATO headquarters in Brussels in January. He underlined, firstly, that Pakistan's foreign policy remains India-centric and, therefore, an Afghan policy which puts India at an advantage in the region at the expense of Pakistan's influence was not acceptable.

Secondly, he emphasised, Pakistan continues to seek a role in Afghanistan but with a notable change: Pakistan will not attempt to dominate Afghanistan and was willing to reconsider and renounce its policy of seeking "strategic depth" in Afghanistan.

The notion of "strategic depth" has long been the cornerstone of Pakistan's military doctrine on its western borders. While the question of changing this policy might appear inconsequential to some political observers, it is likely to have a significant impact on military thinking and practice. If Afghanistan "is peaceful, stable and friendly, we have our strategic depth because our western border is secure," said Kayani. The clarity of the explanation by the head of Pakistan's army signals the emergence of a revised strategic doctrine in Pakistan.

Thirdly, the Pakistani establishment is distancing itself from what many believed was its policy of considering the Taliban as a strategic asset to compensate for its disparity with India in other aspects of military balance. Responding to the oft-repeated charge of duplicity on the issue of fighting or supporting the Taliban, Pakistan's leadership argues: "If we can demonstrate our ability to subdue the Pakistani Taliban in Malakand, our stated position of being opposed to the entire Taliban movement should be seen as credible."

Thirdly,given its Afghan experience and relationships with all the stakeholders, Pakistan is keen to play a role in negotiating with the Taliban, thus becoming a pivotal facilitator of Obama's exit strategy. Pakistan hopes that peace in Afghanistan will help restore the writ of its own government in areas bordering Afghanistan. It is presently compromised by both domestic and international intrusions. Pakistan will thus view this as a key benefit.

Pakistan's military appears to be working on a strategic doctrine, which is partly a continuation of the past and partly a revision. According to General Kayani, the concept of "strategic depth" in Afghanistan is being replaced by the notion of a "stable, unified and peaceful Afghanistan". This new approach should be followed through consistently and its comprehension should permeate all relevant levels of stakeholders - including parliament. Given its importance for Pakistan's internal and external stability, there should be an open and transparent discussion on "Pakistan's new Afghanistan policy" with room for disputation.

All the evidence suggests that there is a broad Pakistani national consensus on the key contours of a new Afghanistan policy, these being that:

Pakistan has a strong legacy of institutions which managed its Afghanistan policy during the Soviet occupation. Parts of that legacy might have been flawed, but it is a rich legacy which can be drawn upon. Informed by the mistakes of the past but drawing on its reservoir of individual and institutional strengths of that period, Pakistan should rebuild an institutional structure to operate a new and proactive Afghanistan policy.

It may be worth recollecting that the soviet exit from Afghanistan failed to bring peace because all external actors continued to push for the domination of their favourites in post-Soviet Afghanistan.

* Dr. Ijaz Shafi Gilani is the Chairman of Gallup Pakistan

Last modified on Thursday, 19 February 2015 14:27
Tweet
More in this category: Al-Qaeda in the New National Security Strategy »
back to top