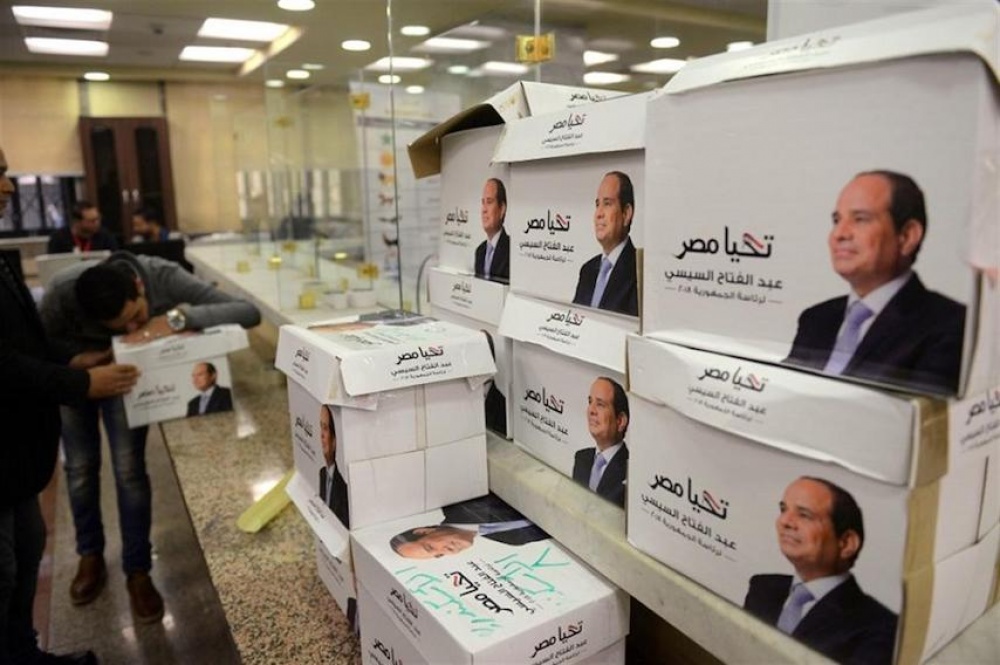 Published in Egypt
Tagged under

The Egyptian government’s need to artificially increase voter turnout in the presidential election at the end of March through a combination of enticements and threats indicates a growing disillusionment among ordinary Egyptians with the political situation in the country. With the victory of the incumbent, Abdel-Fattah el-Sisi, which was never in doubt, it is likely that Egypt will see an increase in already-high levels of repression.

Long before official electoral results gave Sisi ninety-seven per cent of the vote, his victory had been expected by everyone, especially after former military chief of staff, General Sami Anan, had been arrested in January, and human rights lawyer Khaled Ali had been forced to withdraw from the race. These events occurred in an atmosphere in which dissent was being violently repressed. That repression intensified in the past few months as the regime sought to shut down the already minuscule space available for opposition.

Sisi’s rein has seen thousands killed and tens of thousands arrested; a 2013 law severely curtailed the right to protest; and a 2017 law ensures that only NGOs supportive of the regime are able to operate. Some constituencies that had initially given some level of support to SIsi, such as leftist parties and youth organisations, have seen  their members arrested more recently, and the state has been formenting leadership contestation within some such groups. In a 29 January statement, Anan, Ali, and others labelled the electoral process a sham and advocated a boycott. To prevent Sisi being the sole candidate, the regime allegedly influenced Al Gad party’s Moussa Mostafa Moussa, who had already expressed his love for Sisi, to register as a candidate hours before the close of nominations. Until a week before his registration, he had been actively campaigning for Sisi.

With all these shenanigans, the only question that the election would answer was how large the voter turnout would be. The regime resorted to threatening voters to ensure a high turnout, which it believed would indicate support for Sisi. Teachers were forced to sign voter cards with their inked fingers in an attempt to ensure that they had voted, and in the governorates of Beheira and New Valley, officials had promised increased social services for districts with high voter turnouts.

In Minya and Sohag, police sought to pressure citizens to participate, and street vendors were threatened with the confiscation of their property if they failed to vote. Despite these attempts, voting numbers were still low, and the preliminary turnout had to be adjusted upward from forty to forty-two percent; Sisi’s vote of ninety-two per cent was also upped to ninety-seven per cent in order to equal the 2014 poll.

Astonishingly, the National Election Agency (NEA) claimed a high turnout in northern Sinai despite the Egyptian military’s scorched earth operations in the peninsula, and despite many in the region not being regarded as integral to Egypt, and many not even possessing full citizenship rights.

Although Sisi’s victory was guaranteed, the severity of the measures instituted to crack down  on dissent and ensure that citizens voted point to his many failings. His handling of the economy has alienated many Egyptians; a twelve billion dollar IMF loan was conditioned on the regime drastically reducing subsidies and allowing the currency to float. This aggravated the conditions of Egyptians, and criticism of the regime has increased, even from previously supportive lawmakers and television personalities. The president’s decision to hand over the Tiran and Sanafir islands to Saudi Arabia angered many Egyptians who had supported his nationalist rhetoric; and the insurgency in northern Sinai (and its spillover into the mainland) saw Sisi’s security credentials being questioned. The opposition from Anan and former air force General Ahmed Shafiq are significant in this regard, and suggest the possibility that there is not unanimity within the military regarding Sisi’s rule. In October 2017, he dismissed his confidante and military chief of staff Mahmoud Hegazy, and in January 2018 he fired the head of intelligence, Khaled Fawzy, leading some former insiders to argue that military discontent is at a high.

With Sisi’s electoral victory, it is likely that harsher measures will be implemented in Egypt, especially as regards economic policy, which could see further subsidy cuts to unlock the second tranche of the IMF loan. This will likely lead to more discontent and further repression, especially if citizens’ socioeconomic conditions worsen dramatically. The international community, especially since the accession of Donald Trump to the US presidency in 2017, and later Emmanuel Macron’s election to the French presidency, has been willing to tolerate Sisi’s repression since Cairo is regarded as being in the frontline of the battle against the Islamic State group, whose strongest branch (Sinai ‘Province’), operates in Egypt, and because Cairo is largely supportive of the dominant powers on regional issues. Sisi’s victory is also being seen by many as a sign that he might attempt to amend the constitution to remove the two-term presidential limit. Already, pro-Sisi parliamentarians are agitating for this, thus laying the ground for a new confrontation.