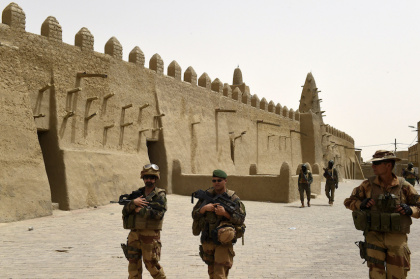 Recent protests in Mali pose the greatest threat to the regime of Ibrahim Boubacar Keita, who has led Mali since 2013. Endemic corruption, Keita’s failure to curb the militant threat in the north of the country, and accusations of electoral  fraud have spawned a disparate protest movement, the M5RFP, led by influential cleric Mahmoud Dicko. The responses by foreign powers, especially France, could help determine Keita’s fate. Like many other leaders in the region, including Idriss Deby and Mohamedou Essoufou in neighbouring Niger and Chad respectively, Keita owes his survival, to a large extent, to French and American support. Mali is, after all, the epicentre of the militancy in the Sahel, and currently the home of the second largest UN peacekeeping mission (MINUSMA), comprising over 15 000 UN personnel (13 000 military troops and 2 000 police).

The most recent round of protests began in May, after the constitutional court’s decision upholding the results of the March and April parliamentary poll, which had originally been scheduled for 2018, but which had been postponed twice due to security concerns. Especially contentious was the court’s decision to uphold the results of around thirty seats in the second round, held on 18 April, which saw Keita’s Rally for Mali Party (RPH) and its allies awarded most of the seats.

Large protests occurred on 5 June, organised by a coalition consisting of the thirty-party Front for Safeguarding Democracy (FDS), civil society organisations under the banner of Espoir Mali Koura (EMK), and the Coordination of Movements, Associations and Sympathizers (CMAS), led by the influential Dicko. Initially demanding the election results be overturned, M5RFP now wants Keita’s resignation and the dissolution of parliament. Protesters are calling for civil disobedience, including the non-payment of fines. Massive protests have occurred in the past few weeks, which the regime has been unable to quell, despite its use of force and the arrest of protest leaders. Over twenty protesters were killed and 150 injured since Friday, 10 July, when protesters blocked bridges and forced their way into the country’s state broadcaster and into parliament.

These protests follow increasing disillusionment of Malians with Keita’s governance, with the northern militancy being a major grievance. Many citizens criticise the nature of his electoral victories, especially his second term presidential electoral win in August 2018, and the parliamentary vote. Malians are also concerned that his inability to tackle the country’s militancy threat has resulted it spreading to the centre of the country. Economic mismanagement is also rampant, especially in relation to military procurement, while Keita’s decision to purchase a new forty-million-dollar presidential jet angered people further.

Since April 2019, following the massacre  of over 100 Fulani people the previous month, numerous protests have occurred against the government’s inability to restore stability to the country. Teachers and widows of soldiers killed on duty also protested, calling for salary and pension increases. Keita’s inability or unwillingness to oppose French designs for the country has also caused much dissatisfaction. Most Malians are critical that militancy in the country has grown despite the presence of UN, French and regional troops in the country. Huge protests opposing France’s presence occurred in 2019 and 2020, resulting in the French president, Emmanuel Macron, summoning Sahelian leaders to Pau in January 2020. A poll in Bamako in December 2019 saw Keita’s approval at twenty-six per cent; over eighty per cent of the participants had a negative view of France and wanted Paris to leave the country. Significantly, Bamako, home to most of the country’s population, was previously seen as a Keita stronghold.

Keita has responded to the protests by releasing around twenty protest leaders arrested after the 10 July protests. He also vowed to reform the constitutional court and allow it to again adjudicate o the rerun/second round electoral decisions, and said he was open to the formation of a national unity government. However, he is silent on protesters’ calls for the dissolution of parliament and for his resignation. Prime Minister Boubou Cisse also apologised for the security forces’ heavy-handed response to the 10 July protests, but said Keita would not resign since he was democratically elected. An Economic Community of West African States (ECOWAS) decision advocating electoral reruns in contested districts seems outdated, and has not been accepted by either the government or protesters. ECOWAS has since dispatched former Nigerian president, Goodluck Jonathan, as an envoy to mediate between Keita and the opposition.

Meanwhile, in the north and centre of the country, militancy continues. An attack on a military convoy on 13 June, likely by Jama'a Nusratul  Islam WalMuslimin (JNIM), killed over twenty Malian soldiers. Further, the UN reports that between January and June, around 300 Fulani and Dogon people were killed in communal violence in the country’s central regions. Keita’s attempts to negotiate with militant groups, which was mandated by the 2017 National Conference of Understanding (NCU), but which had been delayed because of government intransigence and pressure from outside powers, has stalled. Seeking to benefit from the growing anti-French sentiment, JNIM stated that it would only begin negotiations after France pulled troops out of the country, and referred to Mali as French-occupied territory.

Keita’s only real strength is his support from foreign powers who view the Sahelian crisis, which saw over 4 000 civilians killed in 2019, primarily as a security threat. These powers, especially France and the USA, regard Keita’s continued rule as critical in their attempt to combat Sahelian militancy. In January 2020, Keita endorsed the Pau declaration calling for the formation of a French-led joint command to combat JNIM and the Islamic State group’s ‘Greater Saharan Province’, and seeking the deployment of more French troops. The large protests in Mali in opposition to France was one reason informing Macron’s summoning Sahelian leaders; he wanted them publicly to call for more French assistance. Paris and Washington have been silent on the recent protests, and despite the UN and ECOWAS criticising the government’s heavy-handed response, Keita continues to have their backing.

There still is room for negotiations between Keita and the opposition since both are amenable to mediation. Despite the M5RFP reiterating its demand that Keita step down, Dicko, the most influential member of the coalition, is willing to consider compromises. He previously had called for protesters’ restraint, and had shown willingness to meet with government officials and ECOWAS diplomats. Keita has also sought to reduce tensions through compromise. He has also not expressed any aspirations to run for a third term, and has attempted to be somewhat restrained in the crackdown on protests compared, for example, to neighbouring Niger. Solving the country’s challenges will, however, require a major change in focus away from viewing militancy as primarily a security issue to considering governance issues and negotiating with militant groups. It is doubtful, however, that France and the USA will allow any Malian government the leeway to pursue this option.