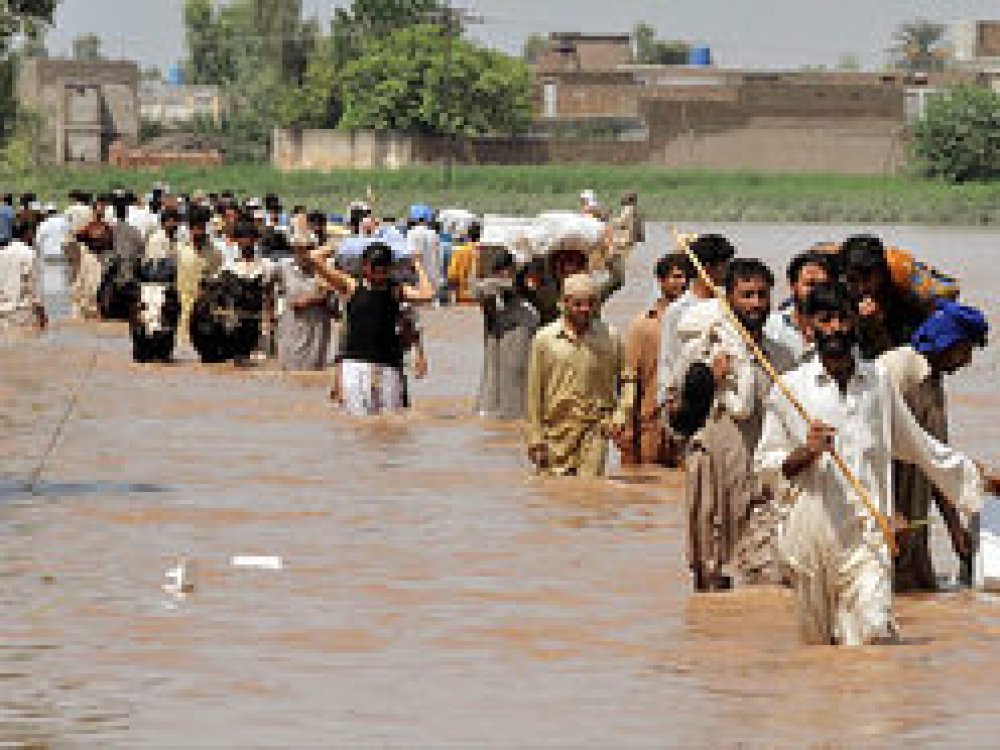 Published in South Asia
Tagged under
By Najam Abbas

Pakistan's recent floods have left eight million people dependent on aid for their survival, and washed away huge swathes of the rich farmland on which the country's struggling economy depends. The Pakistani government has confirmed 1,600 people dead and 2,366 injured, but its officials warn that millions are at risk from disease and food shortages. The country's disaster agency fears that there will be a "significant rise" in the death toll as waters recede and the number of missing persons is tallied.

According to a spokesperson for the United Nations Office for the Coordination of Humanitarian Affairs (OCHA) in Islamabad, by late August 2010 there were up to 800,000 people in Pakistan's flood-affected areas who could not be reached by land. The only way to evacuate a tiny part of them or to get food supplies to them was through helicopters – and only if the army could make a few available from its already over-stretched operations. With the passing of each day, hunger aggravated by shortages and, in many places, the absence of food has led to starvation. Such conditions have resulted in scuffles at the rare sight of the arrival of a vehicle bringing relief. Many women and children were left vulnerable to stampedes and to being injured. In other places, those who survived the flood tides have been exposed to epidemics due to the lack of clean drinking water. The receding floods have left behind huge pools of stagnant water, which serve as breeding grounds for disease. UN officials said that an estimated 72,000 children, affected by severe malnutrition, were at high risk of death.

With such a situation as the backdrop, referring to the possibility of a threat to foreign aid workers – as some have suggested – is a huge limitation of the threat analysis to just one component. It is pertinent to expand the threat analysis to view the full range of risks, their likely causes and possible consequences.

The combined outcome of the following shortcomings may pose a far greater threat to human lives, the government's stability and its ability to maintain law and order in the country:

For those who are drowning or awaiting food for several days, the political make-up or religious leanings of some elements among the rescuers matters very little, and is hardly likely to influence how the survivors will decide on their political loyalties and future vote preferences. Though some local religious groupings offering food supplies to the flood victims may make a temporary and local impression, they will neither have the resources nor the means to counterbalance the combined weight of western donations and the ability of Pakistan's armed forces to reach the needy.

Having survived the flood waves, a tide of unfolding challenges awaits the population. Pakistan faces a looming economic crisis after the devastating floods that have resulted in the destruction of farmland and in ruined infrastructure; the feared loss of billions of dollars is likely to set back growth by years. The country's worst-ever humanitarian disaster has ravaged an area roughly the size of England, affected 20 million people, exacerbated a crippling energy crisis and raised fears of social unrest. "People are blocking roads, looting food trucks and protesting for not getting relief," said Jamshaid Dasti, a local MP from the ruling Pakistan People's Party (PPP), describing the scene in many areas. "The situation," he added, "could get out of control at some point."

In the southern province of Sind, where flooding has ravaged valuable rice and cotton crops and killed livestock, Qaiser Bengali, an advisor to the chief minister, acknowledged the dangers. "There is a great social risk. Food prices are really high, lots of crops have been destroyed and lots of cattle died, so if we don't pay attention to these issues, there will be huge demonstrations," he said. "Pakistan is so fragile that the government can be threatened as soon as there is social unrest. It's less a matter of the government than a matter of stability of the state."

Farmers have been particularly hard hit by the floods, with the homes of over 4.6 million people being affected. The floods have since been swollen by more rain. More than 100,000 cattle have perished and seven million hectares of agricultural land are submerged. World Bank president Robert Zoellick estimated that crops worth one billion US Dollars have been destroyed.

For a country where agriculture accounts for more than 21 percent of the gross domestic product, and employs 45 percent of the labour force, the long-term consequences will be dire. Nicola Smith wrote in The Sunday Telegraph that: "For farmers, the destruction of crops, cattle and land has crippling financial consequences, plunging many into debt and deep poverty." Although authorities anticipate that it would take at least two years to provide farmers with crops, fertilisers, seeds and food, experts predict that it will take far longer. In order to save the farmers from losing the next crop, there are calls to provide free seed, fertilizer, and some diesel to enable them to sow the autumn crop.

Agricultural land of approximately 8.5 million-acres has been affected by the floods in Pakistan's bread basket province of Punjab, destroying standing crops of sugar-cane, cotton and millet. Moreover, floods have inflicted widespread damage on infrastructure. In the cities, flood waters have destroyed electricity installations, roads and phone lines. About 1,000 villages in the flood-hit districts of southern Punjab are without power. The destruction could set Pakistan back many years – if not decades, further weaken its feeble civilian administration and add to the burdens on its military. More than 5,000 miles of roads and railways have been washed away, along with some 7,000 schools and more than 400 health facilities, says the New York Times.

One million people were displaced by floods in towns around Kotri and Sukkur in Sind province. A fresh influx of people to urban centres may increase the risks in areas where food prices are rising, and there is a shortage of supplies. Disappointment may lead supporters to distance themselves from those they traditionally elect.

When discussing the floods and their consequences, three aspects are worth interrogating: 1) the current position of the people and government of Pakistan; 2) the task and tribulations ahead; and 3) What needs to be done.

The government of Pakistan is currently experiencing something much more than a temporary crisis or a territorially confined disaster. In order to respond to the looming challenges, it needs to show what measures will ensure speedy rescue, quick relief and effective rehabilitation for the victims of the flood.

Once the levels of flood water recede, the wave of public anger may rise. The government needs to show it can take effective measures to prevent social unrest from spreading widely. It must demonstrate that those who are displaced and disappointed will not end up overcome with the kind of desperation that will not be contained if it snowballs into mass discontent. Federal and provincial authorities need to show prompt action, speedy rescue and effective relief.

The Islamabad government needs to demonstrate how effectively the grievances of the people will be addressed and their expectations managed. It must be remembered that many of these are the same people who had been displaced during the 2009 military operations in Swat and the 2007-8 operations in South Waziristan. The government thus has the task to wash away the stains of mistakes by earlier administrations and to demonstrate that it will not make similar mistakes of its own. At the same time, the government has to bear the burden of past follies. The reconstruction following the deadly 2005 earthquake was to be completed by the present regime after it assumed power in 2008. It is responsible for placing on record the progress it has made and the amount of work remaining.

Pakistan needs a clear vision and action plan which demonstrate that it has correctly prioritised how it will manage the disaster effectively. But it cannot do all this on its own. As Rune Stroem, Asian Development Bank's Country Director for Pakistan, said: "It will take massive efforts to deal with this monumental crisis." With the problems being compounded by delays, and inadequate or insufficient support, Pakistani commentators fear that formidable storms will rise after the floods. Many analysts fear that the unfolding natural calamity can snowball into a serious national crisis with regional consequences.

The Pakistan army's in rescue and relief operational capacity is overstretched, with its resources spread over an area which equals the territory of Britain and France together. This will limit both its capability and desire to extend any active combat operations in any new areas for long months to come. Writing in the Telegraph, Ahmad Rashid warned: "Pakistan's floods have not just devastated the lives of millions of people; they now present an unparalleled national security challenge for the country, the region and the international community. Lest anyone underestimates the scale of the disaster, all four of Pakistan's wars with India combined did not cause such damage. It has become clear … that, unless major aid is forthcoming immediately and international diplomatic effort is applied to improving Pakistan's relations with India, social and ethnic tensions will rise and there will be food riots."

Pakistan's friends and allies have been asking her to do more to beef up security on her borders; now they are being asked what they can do to ensure the survival and security of millions of people challenged by nature. Extending a temporary lifeline to rescue the victims may help them survive from one crisis to another, but a phased assistance plan can help revive the country's economy. Such a strategy would envisage Pakistan's trade partners easing restrictions and raising import quotas. A possibility that allows greater market access for Pakistan's textile goods, in particular, will be a significant step, since the textile sector is the source of over 50 percent of the country's exports and about 40 percent of its manufacturing jobs. Additionally, countries importing labour for their service sectors could consider recruiting labourers from Pakistan's flood-hit areas as a means of supporting affected families. Such measures will ease the pain of losses and facilitate a smooth rehabilitation.

The European Union's head for Foreign Affairs, Catherine Ashton, emphasised that: "The international community needs to be ready to support Pakistan in a lasting manner." She added: "This will be a significant element for long-term recovery. A safe, secure, stable and prosperous Pakistan is in the interests of the EU and the wider international community." Underlining a sense of urgency, Ashton pointed out: "You have vast parts of Pakistan affected by floods; it's immensely strategically significant, and the situation will sadly get worse and worse. There's a real need to demonstrate that the international community as a whole can react." The pressing question now is how the well-being of 20 million affected people will be prioritised adequately in terms of resources mobilised for immediate relief, short-term rehabilitation and long-term recovery.

* Dr. Najam Abbas is a London-based Senior Fellow (on Central and South Asia) of the East-West Institute

Last modified on Thursday, 19 February 2015 13:37
Tweet
More in this category: Kashmir and Obama's Indian appeasement »
back to top